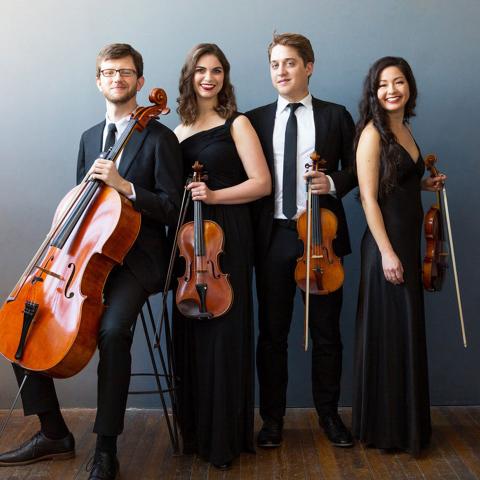 With performances acclaimed for both “high-octane” excitement (The Strad) and “dusky lyricism” (New York Times), the Aeolus Quartet has been awarded prizes at nearly every major competition in the United States and performed across the globe. Formed in 2008, the Aeolus Quartet has performed in venues ranging from the Chamber Music Society of Lincoln Center and Lincoln Center's Great Performers Series to Weill Recital Hall at Carnegie Hall, to Dupont Underground, a subterranean streetcar station in DC's Dupont Circle. They were the 2013-2015 Graduate Resident String Quartet at the Juilliard School and are currently Quartet-in-Residence at Musica Viva, NY. In addition to extensive touring throughout the United States, the 2021-22 season includes a Morgan Library performance as well as a feature on the Violin Channel.

Returning to SBMA after a lauded performance in 2019, the Quartet will perform Beethoven’s Quartet in Bb Major, Op. 18 No. 6, Caroline Shaw’s Blueprint*, and Schubert’s Quartet in G Major, D. 887.

* Caroline Shaw’s work will be performed three times this season. This New York City-based contemporary musician and composer became the youngest composer to win the Pulitzer Prize for music in 2013. She is often cited as proof that classical music has an exciting future.

Chamber Music Concerts at SBMA are supported by the Katharine Putnam and Reginald M. Faletti Concert Fund with additional support from the Curletti Fund.

In an effort to create the safest possible environment, please note visitors who plan to attend an event in SBMA’s Mary Craig Auditorium must show proof of being fully vaccinated with a booster (if eligible) OR, in some cases, supply a negative Covid-19 medical test result (taken within 72 hours prior to each event), along with an official photo ID, before entering the venue. All visitors must also follow SBMA’s mask policy and wear a mask while attending events in SBMA's Mary Craig Auditorium.