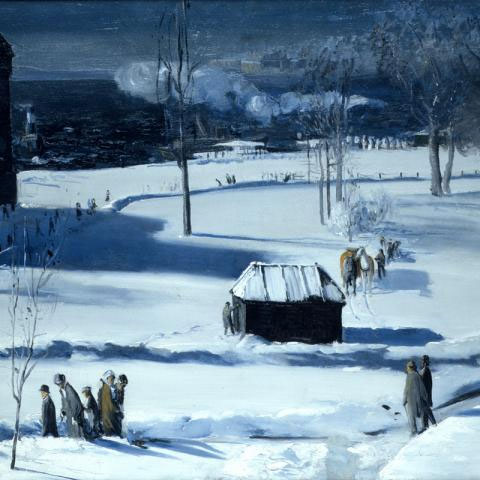 Inspired by his teacher Robert Henri’s credo of “Art for Life’s Sake,” George Bellows strove to make his paintings as capacious as life itself. Nowhere is this ambition more evident than in his winter views which run the gamut from pleasant scenes of leisure to harsh depictions of urban labor. In these remarkable paintings Bellows transmuted the substance of snow into the substance of paint.

Charles Brock is Associate Curator of American and British Paintings at the National Gallery of Art in Washington, D. C., where he has worked since 1990. In addition to his expertise in American and British painting, Brock has participated in a number of important projects related to photography.  He was a major contributor to the catalogue for the landmark show Modern Art and America: Alfred Stieglitz and His New York Galleries (2001) and in 2006 authored Charles Sheeler: Across Media. Among the numerous other publications Brock has written for are Winslow Homer (1995), James McNeill Whistler (1995), The Victorians: British Painting, 1837-1901 (1997), Twentieth-Century American Art: The Ebsworth Collection (2000), From Bingham to Eakins: The John Wilmerding Collection (2004), and American Modernism: The Shein Collection (2010). In 2012 Brock served as the volume editor of the catalogue for the critically acclaimed retrospective exhibition George Bellows organized by the National Gallery of Art and Royal Academy of Arts. In 2014 he co-authored Andrew Wyeth: Looking Out, Looking In with Nancy Anderson. Brock is currently organizing an exhibition devoted to Whistler’s Symphony in White, No. 1: The White Girl.

This event is sponsored by