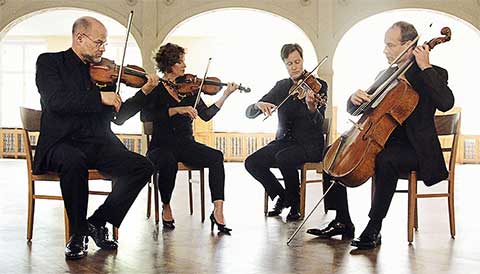 Formed in 1983 in the German wine region in Neustadt an der Weinstrasse, three Schmidt siblings – Sebastian, Nanette and Bernhard – join with violist Andreas Willwohl in a partnership dedicated to exemplary performances of chamber music. The Mandelring Quartet’s success in winning some of the world’s great competitions – the Munich (ARD), Evian, and Reggio Emilia (Premio Paolo Borciani) – launched an impressive international career that brings them to all corners of the globe. Today, their performing commitments take them to international musical centers such as Vienna, Paris, London, Madrid, New York, Los Angeles, and Vancouver, as well as regular tours to Central and South America, the Middle East, and Asia. Their discography include more than thirty CD recordings, which have been repeatedly awarded the German Music Critics’ Prize, and been nominated for the International Classical Music Award, confirming the Mandelring Quartet’s exceptional quality and wideranging repertoire.